San Diego Chargers Despite his stellar college resume, Brees' relatively diminutive stature (he's listed at 6 feet) and perceived mediocre arm strength greatly contributed to him slipping out of the first round of the 2001 NFL draft. He wound up with the San Diego Chargers as the first pick of the second round. As a Charger, Brees proved himself to be one of the game's better quarterbacks. After stepping in as the team's full-time starter in the 2002 season, Brees led a young San Diego team to the playoffs in 2004, resulting in his first Pro Bowl selection. New Orleans Saints Following the 2005 season, Brees left the Chargers as an unrestricted free agent and signed with the New Orleans Saints, inking a six-year, $60 million deal. For a city and a fan base still reeling from the devastation caused by Hurricane Katrina, Brees was lauded for his decision. Brees hasn't disappointed New Orleans fans. He set an NFL record with 5,476 passing yards in 2011 (since broken), also topping the league that year with a career-best 46 touchdowns. And despite his reputation as a "gunslinger," he continued to complete an unusually high percentage of his pass attempts. More importantly, he made the Saints a winning team. In 2009, he led the franchise to victory in Super Bowl XLIV, earning the game's MVP honors along the way. Brees remained among the best at his position for the next decade. In 2018, at the age of 39, he surpassed the NFL career records for completions (set by Brett Favre) and passing yards (set by Peyton Manning). That year he also completed a personal-best 74.4 percent of his throws and earned a 12th Pro Bowl selection, though the season ended in disappointment with a controversial loss to the Los Angeles Rams in the NFC Championship Game. Along with his passing skills, Brees proved his durability by appearing in at least 15 of 16 regular-season games in every year from 2004 to 2018. That streak came to an end when he sustained ligament damage in his thumb early in the 2019 season, but he showed no signs of rust after returning in late October, compiling 373 yards and three touchdowns in a blowout win over the Arizona Cardinals. In December, Brees set another NFL record by toppling Manning's career total of 539 passing touchdowns. Only 4 of these ever graded PSA 9 with none graded higher as of 3/10/2027 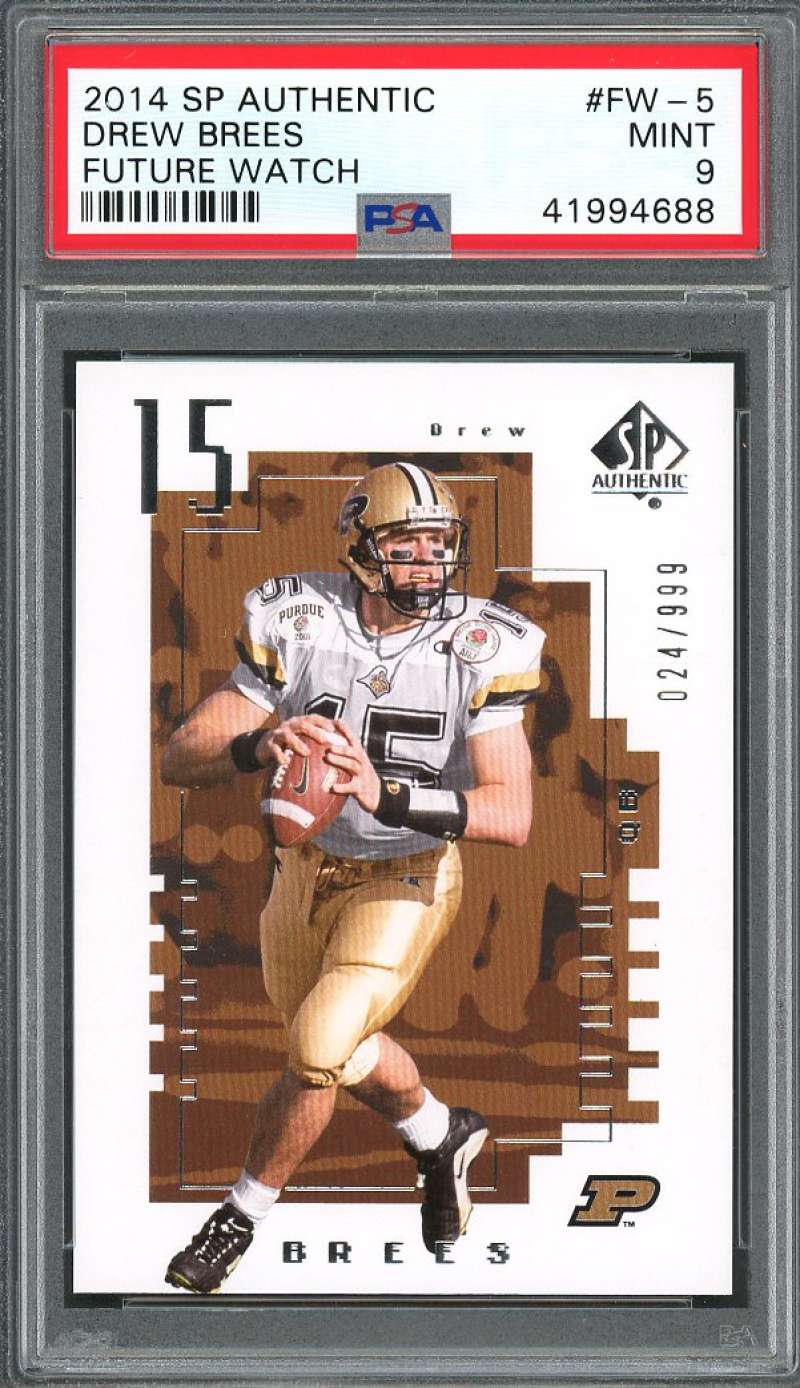